A new ride for Izzy Chaplin

Izzy tells us of the juggling needed to keep up with her studies and her riding. 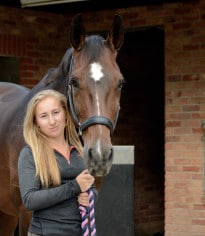 So much has happened since I wrote my last blog. After a few weeks at uni at the beginning of September I headed off to Cambridge to start my first 3 month placement working for the accountancy firm PriceWaterhouseCoopers. It was a great experience! However it did mean that I wasn’t able to ride as much as I liked and it took me 2 hours to get to the yard each time I wanted to ride! I couldn’t have done it without the team at Aspire Training and Livery. Thank you so much for keeping the horses going and in great condition.

ALL CHANGE FOR DORA

The hours travelling were worth it though as Dora came back better than ever and we have finally had a breakthrough with the flying changes. It only took 2 years but our persistence paid off! Over the winter months, with the help of Henry Boswell, we focused on training Dora to start to have a lot more self-carriage and working towards some of the PSG movements. I never thought I would have a chance at PSG with her, but this is slowly looking like it could be a realistic goal, not a hope! 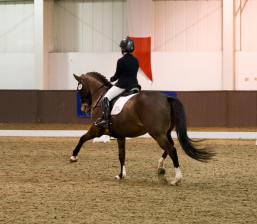 Dora at the Winter Regionals

My first competition after this was to do the freestyle to music classes. I really enjoy these as I can create the floorplan I want to show off Dora’s strengths and pick the music that I like. I cut and adjust the music myself using a free piece of software, Audacity. Although it may not be of the same quality as one done professionally, I enjoy being able to create the whole routine myself and it makes it even better when we do well at the competition. We had a great 2 tests winning both of them with over 69% so already half way to being qualified for 2017 before 2015 was even finished.

A few weeks later I also had the great news that I had been selected as one of the BYRDS Ambassadors. 12 U25’s riders from around the UK had been picked and I felt honoured to be representing the Southern region with Holly, the other Southern ambassador. Hopefully I will be able to pass on my experience from the past couple of years to the younger, up and coming BYRDS riders.

Christmas meant the end of my placement in Cambridge and a chance for me to bring Dora back home to Kent for a few weeks. It was great being able to go from only being able to ride at weekends to being able to ride every day and I also managed to fit in a competition before the end of the year with Dora doing amazingly, despite refusing to go in the outdoor warm up as she didn’t want to get her feet wet… We came away with 2 wins in the Medium and Advanced Medium so we ended the year on a high. 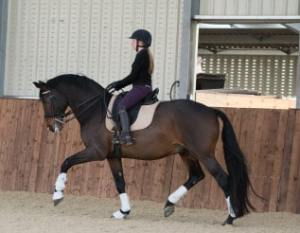 Building a partnership with Vinnie

Soon it was back to Nottingham and Dora was back up in Warwickshire and I had the most amazing opportunity. I still can’t quite believe it but I was offered the ride on Vincente II (“Vinnie”), owned by Coral Ingham, with the aim to take him out to Young Riders in the next couple of months. I never thought I would be able to ride such an amazing horse! I am now learning the ropes, as it is very different going from riding the same horse for a couple of years, to one which is trained to a much higher level and it used to legs that are twice as long as mine… But it is coming together and I can’t wait to get him out to a competition. 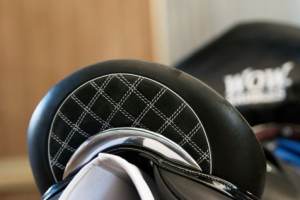 WOW then came up and made a beautiful saddle for Vinnie and I. I absolutely love the white contrast stitching on the back on the saddle, with the patent piping – it’s unique. The team in Canterbury also made the saddle flaps and knee blocks slightly shorter so it fits me perfectly. I am so impressed with the quality and the amount of time and effort that went into making the saddle, I really do have the best sponsors and Vinnie loves the saddle too!

I have a few busy weeks coming up with Vinnie’s competition debut planned so keep an eye on my Facebook page! https://www.facebook.com/IzzyChaplinDressage/?fref=ts