From first sit to finalist in 3 months

Kathy’s Story. A young rider and experienced horse were brought together by a Pony Club instructor, with the idea that with 6 months’ work they might be part of an Inter-branch dressage team. Further aided by Wow saddle fitters (one had a pair of second hand dressage flaps and the local fitter checked the saddle over for the new rider) and trainer Louise Speight, the pair progressed from their first introduction to Dengie Open finalists in three months. 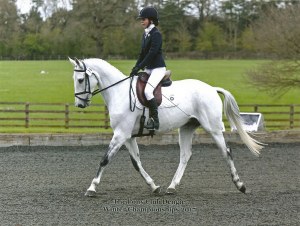 Kathy Williams competes affiliated showjumping, and is an active Pony Club member, working towards her A test. She currently has to juggle her riding alongside working hard for A levels as she plans to study politics at University. 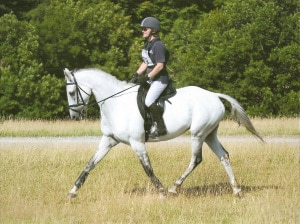 Majestic Light (‘Flossie’) was retired from eventing a couple of years ago, and had been enjoying the life of a lady of leisure: hacking plus a few sponsored rides. but like many ladies, she loves everything about a party, from the primping to being the centre of attention at an event. So the chance to do Pony Club dressage was perfect!

At New Year, Kathy met Flossie for the first time. A very different ride from her own showjumper, Flossie is well schooled and responsive, but isn’t always off the leg. Having never ridden a horse at this dresssage level before, Kathy was tentative at first, but the two soon struck up a good working relationship. First Sit. The Wow deep seat saddle here has VSD flaps and a Soft Straight girth. The horse is comfortable, but with her forward girth groove, the saddle is sitting slightly forward in spite of a point strap for the front girth billet. With her school commitments, Kathy could only ride once a week, but within half a dozen rides it was deemed that some competition practice would be useful before Kathy got down to serious revision.

The Dengie Winter league qualifiers were still running, so off they went to their first competition, an Intermediate Dressage qualifier. Flossie proved to be an absolute saint at competitions, oblivious to what anyone else was doing in the warm-up, or flapping flags and lanyards at some very windy winter outdoor venues. Kathy’s riding, secure now in the same deep seat Wow but with moveable block dressage flaps and, on a (generally!) predictable horse, went from strength to strength. She qualified for the Intermediate Regionals first time out, and the Open one on her second outing.

Having got her mock A levels out of the way, Kathy managed to fit in one or two extra rides on Flossie to prepare for the Regionals. Wow fitter Sarah Richards reviewed the saddle fit. She changed the back girth billet attachment to a balance strap, and swapped the Soft Straight girth for a Soft H girth. The saddle now sits beautifully still in the middle of the horse, without any need for excessive girthing. Open Champs Regional. Kathy rode a lovely test in the Intermediate to get 70%, and came third in the Open. The winner being unable to attend the Finals, Kathy and Flossie qualified as one of the two to go forward.

The finals were just two weeks later, and used the Championship test. Not only had Kathy never ridden this test before, with its shoulder-in and counter canter loops, she had never competed in a 20m x 60m arena, so new markers to learn too. Up against the best Pony Club dressage riders from across the UK, Kathy and Flossie, possibly the least experienced partnership, held their own, did a lovely, flowing, error-free test and were a credit to themselves and to everyone who had helped them on their way.
Open Champs Final Snippets. With a long pause now to concentrate on and complete her A levels, Kathy is looking forward to being re-united with Flossie and her Wow for the Pony Club area competitions in the summer.