We were delighted to hear that three of our Wow Ambassadors had ridden their way through to the BD Winter Championships. On the Saturday night Gala Evening, both Lesley Peyton-Gilbert and Daisy Coakley had been invited to ride in the Inter 1 Freestyle.  Before then, Daisy contested the Petplan Inter 1 Silver, and Izzy Chaplin the Petplan Advanced Medium Silver. Between classes, we took a few moments in the spring sunshine to catch up with Izzy and Daisy, both U25 riders, and get their answers to 10 questions:

Izzy: Kizzy was a 12.2hh Welsh pony, and delighted in playing mounted games, always flat out. She taught me how to ride, and especially how to stay on. We only ever stopped when she felt like it.
Daisy: Crackerjack, an even smaller Welsh pony, fluffy and cheeky. At the age of 31 he is still teaching children to ride – and nipping parents! 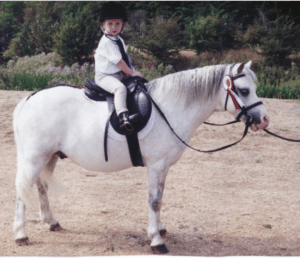 2. Your first dressage test?
Izzy: I attempted the introductory Pony Club test on Kizzy. She was owned by June Long, who also gave me my first dressage lessons. In spite of that excellent tuition, Kizzy did the whole thing with her head in the air and behaved as if it was one long mounted game. But later I took her to the Pony Club Nationals to do a music test, which was a great experience.
Daisy: At Pony Club camp I rode a Prix Caprilli test on a tricky coloured mare. Christa was a terror on this occasion, utterly unco-operative. I reminded myself Prix Caprilli was judged only on the rider, not the horse. So I concentrated on ‘heels down, thumbs on top, big smile for the judge’ – and we won. I learnt the importance of tactical riding, which has stood me in good stead. 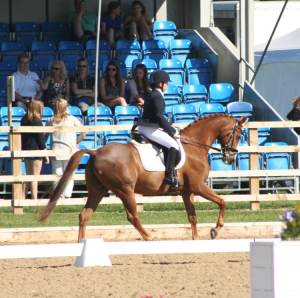 Izzy: Dressage seems to have chosen me! As a Junior, I was lucky to get the ride on Becki Vinter’s lovely Lys de Monsieur, known as Harry. He was an FEI pony from Denmark, and took me to the Premier League and the Pony National squad. And as you go up the levels, the sport gets more and more interesting – and challenging! But I’ve always enjoyed some pole work and jumping with my dressage ponies and horses.
Daisy: Eventing was my first love, and I soon realised that a good test gave me a very helpful start. I thoroughly enjoyed the training involved to create a harmonious, obedient test, and I then had the opportunity to work and progress with young dressage horses.

4. When did you first meet your Winter Championship horse? 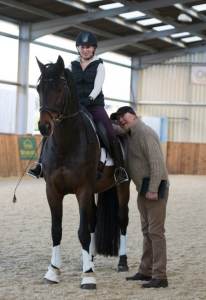 Izzy: I got to know Henry Boswell when he taught clinics for BD Southern, and I’d seen him riding Vincent II (Vinnie). My home is in Kent but when I went to university in Nottingham, it made sense to move my horse Dora to Henry’s yard near Warwick. He introduced me to Coral Ingham, Vinnie’s owner, and it was a dream come true when she and Henry, who had been training and competing Vinnie, offered me the ride.
Daisy: I must have seen Affinity Bay (Finn) years ago as he came to the yard across the road from me as a 4yo. But he was already 17hh, it was intended he would event, and I was just 12. He then went to a northern-based rider as part of his career change, and our paths didn’t cross again until 3 years ago his owner asked me to ride him. We drove 4 hours, I had a sit on him, and brought him home that day, then bought him. A few months ago our partnership moved up another step when we switched to a Wow saddle. WOW Saddles Ambassador Daisy Coakley

5. What is your favourite thing about him?
Izzy: He is just like an overgrown pony! I love that, and that he always tries for me. For a stallion, he is impeccably behaved in all circumstances – I ride in a quadrille with him, with mares, and he doesn’t put a foot wrong.
Daisy: He has a quirky personality, which I’ve had to get to know well to keep him onside. He is just as expressive in his body language as he is in his work, and it makes our relationship very special.

6. What does he find easiest? 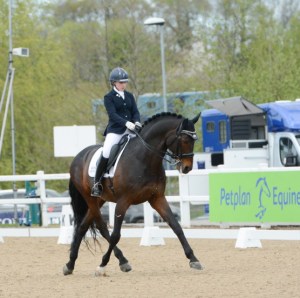 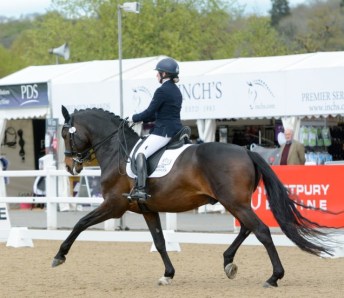 Izzy: Definitely passage! Not that we need it yet, at Advanced Medium, but it’s Vinnie’s default mode, and he loves to throw it in to liven up any trot work.
Daisy: Finn used to use flying changes the same way in his canter work – much preferable to all the strides being on the same boring lead. Now he’s doing tests with tempi and plenty of other changes, he’s become more accommodating when I don’t want them.

7. What are your future competition plans?
Izzy: I’m looking forward to riding Premier League PSGs, and working on progression to Inter 1. And I also fully intend to enjoy my competitions – otherwise why would you do them?
Daisy: Now we’re getting more established at Inter 1, I’m aiming at Premier League Inter 1s, while working at home on Grand Prix movements. 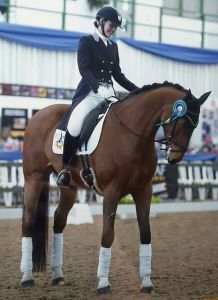 8. When you are not riding this horse you….?
Izzy: I’m in my third year of a 4 year accountancy degree at Nottingham University. That, and travelling over an hour each way to ride Vinnie four times a week, accounts for most of my time. I play netball socially, and I love skiing when I get the chance.
Daisy: When I’m not riding this horse….I’m usually riding another one! I have another Inter 1 horse, Aramis, belonging to Judy Firmston-Williams, plus a couple of young horses. And I teach local Riding and Pony Clubs, and some private clients. My relaxation is running – we have some lovely countryside around us, with challenging hills – and a real treat is to visit London art galleries, but it doesn’t happen very often.

9. What is your horse’s favourite treat?
Izzy: Carrots! He’s always searching for them, I think he views humans as walking carrots. He knows he can’t have them before a test – all that orange slobber! – but he gets very grumpy if they are not immediately available afterwards.
Daisy: Extra strong mints for sure. Finn has rubber lips like an equine Mick Jagger and loves hoovering up as many mints as he can.

10. And your favourite treat?
Izzy: Chocolate – Maltesers are my favourite
Daisy: Chocolate too, though I’ll go for the Dairy Milk.