A lovely video of Wow Ambassador Daisy Coakley on Affinity Bay, training with Stephen Clarke. ‘Finn’ was an Intermediate eventer and Daisy has produced him from that level of dressage to be competitive at Premier League Inter 1. 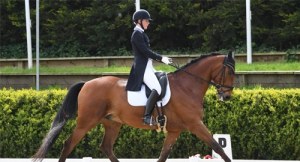 She says: “Since using the Wow saddle I have felt a huge difference in Finn’s way of going. He can now come up more through the shoulder which gives him a greater ability to come under with his quarters and ‘sit’ in work such as canter pirouettes.
He is looser in the tempi changes and as a rider I feel more supported through my leg and seat. I am thoroughly enjoying competing in the Wow saddle and I really do believe it has helped us achieve some of our recent results.“