Zero To Hero: a WOW performer 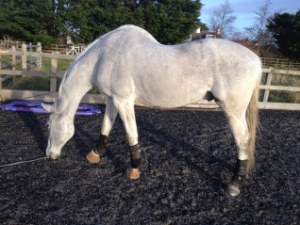 Zero To Hero (‘Pete’) was originally produced by David Wadge BHSI. He had a WOW saddle fitted from the start – few other saddles were suitable for his unconventional conformation.

David competed successfully at Prelim and Novice with him from 2004. Kim Young, a talented local rider who juggles her love of dressage with a busy dog grooming business, got him on loan in 2006. She soon asked Gaynor Ranshaw to treat him with shiatsu techniques, and help with his training. Kim thoroughly enjoyed riding Pete, and the partnership was very successful. 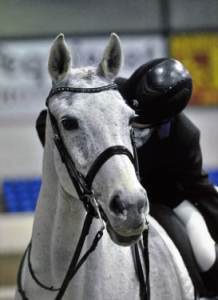 She bought him in 2007 in spite of him failing the vet, complete with WOW saddle – she always says he was free with the saddle!

From 2007 to 2011 Kim competed Pete from Novice to Medium, winning virtually everything they contested, including various regionals and Pet Plan festivals. She was also well placed at nationals on many occasions. Her support team included Jill Grant, who trained Kim from 2009, and Gaynor who had a dual role, continuing to shiatsu him and also work with them mainly on freestyle.

Pete was increasingly influential in Gaynor’s life. As a result of seeing the benefit of a WOW saddle at first hand, she trained as a WOW fitter, and now has a busy practice covering central & southern Scotland and the far north of England. Find her athttp://on.fb.me/1UjzkqE And when in 2011, Kim thought he had reached his limit & needed an easier life she offered Pete to Gaynor on long term loan. 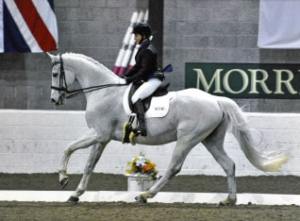 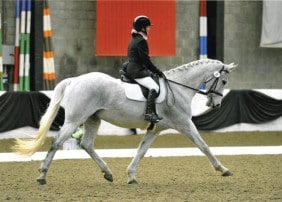 At the age of 18, and having been Scottish Veteran Champion three years in a row, Pete has now asked for some special dispensations: not to be ridden in awful weather, and voting to spend the night in his own stable, not on the road. But he is still fit, going well, and will be contesting Medium & Medium Freestyle classes in the spring.

“I am so lucky to have inherited such a fantastic horse, and have been able to benefit from the excellent grounding he had from David Wadge and Kim Young. The combination of my shiatsu and subsequent WOW fitting skills means I have been able to keep him going happily for the last 5 years, and hopefully for some years to come.”